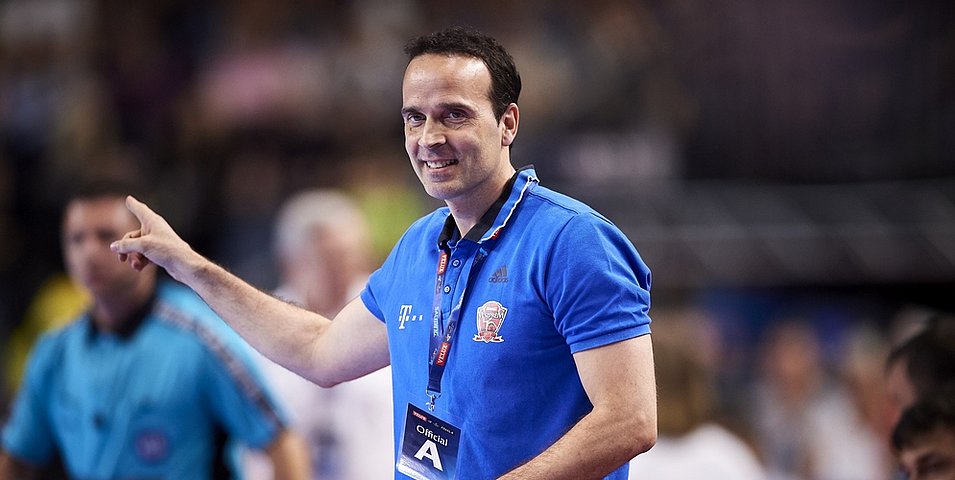 Let’s go GD, let’s go! Chants like these have become vague memories, as Boris Johnson has asked us all to remain focused on flattening the curve of COVID-19 infections. The handball game that we all love so much has been put on hold for the foreseeable future. Quite rightly so, there are more important matters in the world right now!

Nevertheless, our love for handball remains and last weekend our club members reunited virtually for a fun and insightful Q&A session with Xavi Sabaté, the current Head Coach of Wisła Płock. His impressive career also boasts coaching the Hungarian National Team and leading Telekom Veszprém to the 2016 EHF FINAL4.

We want to send massive thanks to Xabi Sabaté for spending Saturday morning with our GD family!

“Players make mistakes, even the best do”

As the coach for one of the best teams in Poland, expectations are naturally high. “It’s never enough. If you win with 10 goals, it’s because of a weak opponent. When you win by 2, your team isn’t good enough,” Sabaté explains. So how does one manage this pressure? Sabaté says it all comes down to always giving your best to achieve your goals. “Players make mistakes, even the best do,” he continues, and adds that mistakes are part of the game. The important thing is what happens next, “mistakes are made so we can improve,” Sabaté concludes.

When asked how to motivate teams and deal with fear of losing in moments of high tension, Sabaté says it’s important to remain calm. “When you’re nervous, you lose control and can’t make the right decision,” he says and adds that “experienced players all know the importance of keeping calm.” Staying true to his philosophy of always giving your best, Sabaté says that players should play as agreed in tight games and continue to give their best. If they do so, and yet end up losing, it’s only right to congratulate the better team.

Growing Handball in the UK

Although its popularity received a boost following the 2012 Olympics, handball remains a minority sport in the UK. Sabaté believes English handball needs to work on increasing the level of interest in the sport,and the number of players, before they can create strong handball traditions and culture similar to what we see in other European countries. As the UK sports landscape is heavily dominated by more popular sports such as football and rugby, Sabaté acknowledges that this is a difficult challenge. Nevertheless he stresses the importance of targeting younger people, as “these are not just future players, but also future supporters of the sport.” Sabaté suggests introducing handball to younger children in schools and creating leagues that can accommodate them.

Always eager to learn and improve, one of our young players asked Sabaté to advise on how to improve handball skills. Sabaté’s answer was simple, “practice, practice and more practice.” Building on this, he explains that repetition is key to improving handball techniques and that players shouldn’t give up when mistakes are made but instead seek feedback from coaches to correct them.

With limited training sessions during the season, and in particular under current circumstances, Sabaté encourages all players to find alternative ways to train at home to keep their form. Although it isn’t possible to maintain the same level of practice, such as running with the ball and other tactical aspects of handball, Sabaté stresses the importance of keeping fit and continuing training to reduce the risk of injuries when the games resume.

The Key to Spanish Coaching Success?

Many Spanish coaches such as Juan Carlos Pastor and Xavi Pasqual “Pasqui” have experienced great success lately at both club and national level. Although Sabaté gives credit to the coaching academies in Spain, he believes the base to their success is the ability to mix traditional handball styles with more tactical elements. As the game has developed from being more physical and advantageous to the Scandinavian and Balkan playing style, handball is now a lot more technical. “The Spanish school takes the best of every player and finds different ways to compete with teams different from them,” Sabaté explains.

Putting aside personal decisions even when difficult

During his coaching career, he has had to make many tough decisions. Sabaté recalls the 2017 World Championship with the Hungarian National Team where Gergő Iváncsik was selected to represent his country for one last time in his career. Unfortunately the Hungarian handball legend left the tournament without getting any playing time, as Sabaté had to make decisions from a team perspective. “The coach always wants the best for the team. A coach must take decisions based on this and put aside personal decisions even when it’s difficult,” Sabaté says adding that decisions are made based on what’s best for the team, not necessarily for the individual player.

Setting aside personal relationships for professional decisions isn’t easy, but his ability to balance these two is what makes Sabaté’s the proudest. “Keeping a good relationship with my players afterwards means a lot to me,” he says and adds, “that means they were satisfied with things from both a professional and personal point of view.”