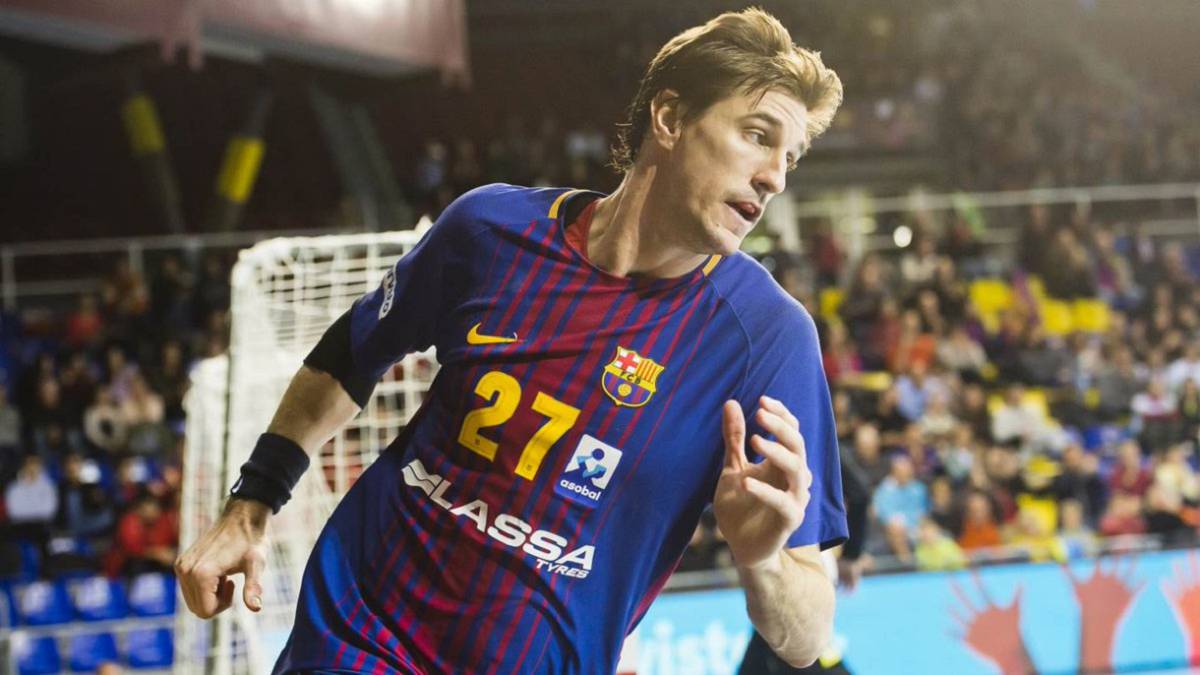 It’s time for the 5th edition of London GD’s Q&A with handball professionals. This time we were joined by the incredible defence specialist of the Spanish national team and Paris Saint-Germain Handball, Viran Morros. We also saw Morros reunite with his former coach Ricard Franch Arcas and Xavi Sabaté from our first Q&A, who dropped by to ask some questions. Big thanks to Viran Morros for making time to chat with our GD family about his amazing handball career!

“My Expectations Were Nothing”

As a 14-year-old Barca fan, Morros did not hesitate when coaches Valero Rivera and Ricard Franch Arcas offered him the opportunity to join Barcelona youth acadmy’s pre-season training. “I had nothing to lose,” Morros says and adds with a laugh that he just wanted to get the Barca t-shirt and training gear.

Once the three weeks of training began, Morros realised that it wasn’t all fun. “Pre-season was hard,” Morros recalls when talking about the physical training they had to endure such as running around Camp Nou. Despite the tough sessions, Morros had a good time and loved the atmosphere of the team. “My expectations were nothing,” Morros says and adds with a smile that he achieved what he came for, “to have fun and the Barca t-shirt.”

Since then, Morros’ love for handball grew and he started to work hard to progress with help from coach Arcas. “I don't know what he saw (in me), maybe my big hands,” Morros jokingly says before adding that he’s very grateful to Arcas for not only giving him the chance but also for having confidence in him when no one else did.

When asked how Barcelona’s youth academy impacted his handball career, Morros couldn’t hold back on praise. “It was really important, not only as a player, but as a human,” he says and explains that while the academy taught him how to play and compete, more importantly it taught him how to live in a team with respect for one another.

According to Sabaté, the best defensive player at the 2012 European Championship used to be a better attacking player. “I had a lot of problems with my defence,” Morros admits as he talks about his time at Barcelona and the numerous suspensions received for not defending properly. Things changed when Morros moved to Pontevedra to play for Sociedad Deportiva Teucro. “I saw there was a spot to fill in the defence,” he says and explains that the desire to play - whether that was defence or attack - pushed him to improve to gain a place on the team.

In addition, the change to SD Teucro also meant moving up to Liga Asobal with physically stronger players which suited Morros’ playing style better. “I feel more comfortable facing big, strong players than smaller players,” Morros explains and jokes that it’s become a new thing lately to put small centre players against him. “That’s not good, ” he adds with a laugh.

Nowadays Morros spends a lot of time on videos when preparing for games. “In the last minutes (of the game), people do things they feel comfortable with,” Morros explains and adds that he tries to remember movements of players he’ll be up against. As a little bonus, Morros revealed a trick used when he fails to cover the pivot and ends up behind the player. “Hit their elbow from behind when they are about to receive the pass,” Morros explains and adds, “with the right strength and timing, they usually won’t get it.”

Morros’ medal collection, including several from the Asobal, Champions League and gold from the latest two European Championships, shows the immense success he’s achieved at both club and national level. Is it still possible to stay motivated? “Every season is a new season with new challenges,” Morros says firmly and adds that he starts every season from zero, as there’s always something new at stake. “Five months ago we were European Champions, but no one remembers it now,” he says when speaking about the cruel truth of sport and its short memory.

In Morros’ opinion, the most important thing is the love for the sport. “I go to the locker room every day and I’m happy,” Morros says but also admits that there are days where the body is sore and in pain. “I’m 36 years old, it’s not easy,” Morros laughs before adding that he loves being with his teammates. “On game days I still feel (butterflies) in my stomach,” Morros says and concludes, “this is what tells me I’m still doing the right thing.”

One thing is left on Morros’ bucket list, the Tokyo 2020 Olympics which has been postponed a year due to the COVID-19 pandemic. “It’s been a 5-year wait,” Morros says and talks about how participating at the Olympics has been a personal challenge of his since Spain failed to qualify for the 2016 games in Rio. “Getting a medal would be incredible,” he says but adds that simply participating at the Olympics will be “more than enough.”

During the Q&A, Morros talked about self-confidence and how his grandfather taught him to have faith in your own abilities. Before a game, Morros repeats to himself that he’s the best even if he might not be. “When I enter the court, I try to be the best,” he says and adds that simply thinking that way will make you better.

Morros also took a moment to share some advice he’s found useful. He particularly remembers one from pre-season training in Barcelona where coach Arcas noticed that Morros was running slower to avoid leaving teammates behind. “When you improve, the team gets better,” he recalls Arcas telling him while encouraging Morros to run at maximum capacity so that teammates would improve by trying to keep up with him. “Your personal improvement is going to be an improvement for the team,” Morros concludes.

Young players today might have different ambitions and ways of seeing the world, however Morros advises them to always work hard and have fun while keeping up with their studies, “because you never know what happens,” he adds. Most importantly, he encourages players to enjoy everything. Morros has made friends for life along his handball career and it’s these memories he treasures and takes with him when the last handball has been thrown.