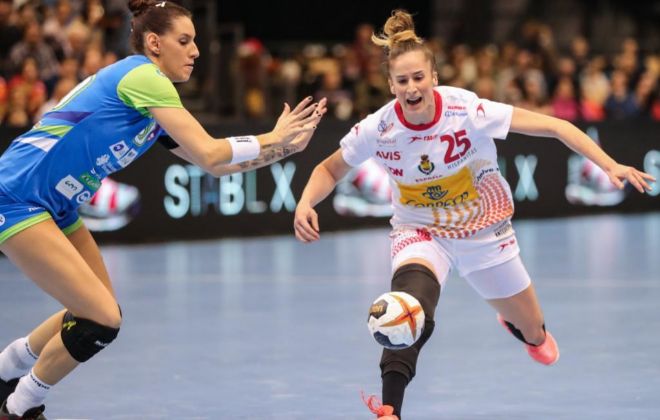 Over the past weeks, our club has been overwhelmed with gratitude as big stars from the handball community have been joining our Q&A sessions in show of solidarity with our GD family who are longing to get back to handball. Last weekend was particularly special as we welcomed our first female handball professional to the Q&A, 2019 World Championship silver medalist and Siófok KC player, Nerea Pena.

Nerea Pena, thanks so much for brightening up our Sunday morning with stories about your handball journey and useful advice. Our offer stands, you are more than welcome to join GD once your run with Siófok KC is over.

With the joy Pena exudes when talking about handball today, it’s hard to believe that the talented centre back was actually forced to play handball initially. “I had no option,” Pena says with a laugh and explains that it was kind of a forced option because her sister was coaching a team at the time.

Despite being dragged to handball practices early on, the Spanish national could easily have ended up in different fields. “I was a very impractical girl,” Pena admits while smiling and adds that her parents had her try out a variety of activities such as basketball and music.

Growing up in Pamplona, Pena didn’t dream of becoming a professional handball player from the very beginning. Perhaps this was due to the lack of professional female teams in her city. Instead, Pena followed and supported the success achieved by the Portland San Antonio men’s team and in particular Jackson Richardson, who Pena considers one of the best players of the time.

Without a female handball role model to look up to, Pena owes much of her handball success to coach Ambros Martín who she worked with for six years at Sociedad Deportiva Itxako (known as Asfi Itxako) since the age of 16. “He taught me everything I know about handball,” Pena says when talking about the influence the coach had on her.

From the cheeky pajarilla (Little Bird) at SD Itxako to a world class centre back for the Spanish national team and Hungarian Siófok KC, Pena believes a lot of her growth is due to the support from former SD Itxako captain, Andrea Barnó. “She was like my second mum,” Pena explains and adds that Barnó saw her potential and became the person Pena looked up to. Along with other SD Itxako players at the time such as Macarena Aguilar, Jessica Alonso and Naiara Egozkue, Barnó has become part of Pena’s close group of friends which she jokingly dubs the “mafia”.

Pena also has a piece of advice to share with younger players, “listen to the experienced players, they want to help.”

Pena has had her fair share of injuries throughout the career and she was happy to share her experience on the recovery from these, as she finds that important. “Nobody is prepared for these kinds of injuries,” Pena states before opening up about her knee injury which happened just a few months before the 2012 London Olympics. “Mentally, it was hard to accept,” Pena says but explains that her physiotherapist was very supportive and helped her focus on rehabilitation rather than the missed opportunities.

As if that wasn’t enough, Pena also found herself to be without a club when SD Itxako was liquidated. “No knee, no team, no nothing,” Pena recalls before continuing, “it became my aim to get better because I wanted to find a new team where I could fight for the Champions League. It became a challenge.”

Pena overcame the challenges and signed with Ferencvárosi TC shortly after. However the knee injury came back to haunt her the following year. “It was really hard as I was in a new team,” Pena explains but also adds that she “always tries to find the positive things from the injuries.” The free time as an injured player was well-spent with family, friends and travelling - all things Pena couldn’t do in her youth because of handball practices. “If you’re injured, keep going,” she concludes with a giggle.

If there was ever any doubt about Pena’s passion for handball, she settles it with her answer on how to prepare for important games. “This is what I wait for the whole season. I work for these matches,” Pena says and adds with a laugh that she actually has to calm herself down to control her motivation more than finding her focus.

On the other hand, Pena admits that it can sometimes be hard to find energy for less important games and adds, “this is really bad, I know.” Pena motivates herself to focus in less important games, by treating them as opportunities to practice and try out new things. One thing applies to all games though, “the most important thing is that the team has the same aim, to create a good atmosphere,” Pena firmly states.

Rituals are a part of the game for many professional athletes, but Pena doesn’t have any herself and jokes about how many players go crazy when they forget to follow their routines. On the national team, they have motivational speeches from captains ahead of important games to get themselves pumped up. “It’s almost like the Haka,” Pena adds with a laugh before doing a little Māori ceremonial dance of her own.

Pena’s journey with the national team has been quite a roller-coaster ride with a disappointing result at the 2017 World Championship followed by a much better outcome at the 2019 edition in Japan where Spain took home second place. Pena believes the explanation lies in the many changes the team went through when Jorge Dueñas left in 2017 after a decade as Head Coach for the Spanish side. “The change of the coach meant a new team and new systems,” Pena adds and continues, “you need time to create a new team that will work.” The hard work to become a competitive team paid off last year and as Pena puts it, “the silver medal in Japan was the reward for this hard work.” Let’s hope for more success for the Spanish team in future.

As for her own future, Pena is open and would like to see what opportunities come her way. She likes the idea of returning to Spain someday to create a strong and competitive handball team, but also doesn’t reject the idea of playing handball in London. Who knows, we might see Pena step into the Copper Box Arena one day wearing the red GD kit. Here's to wishful thinking!