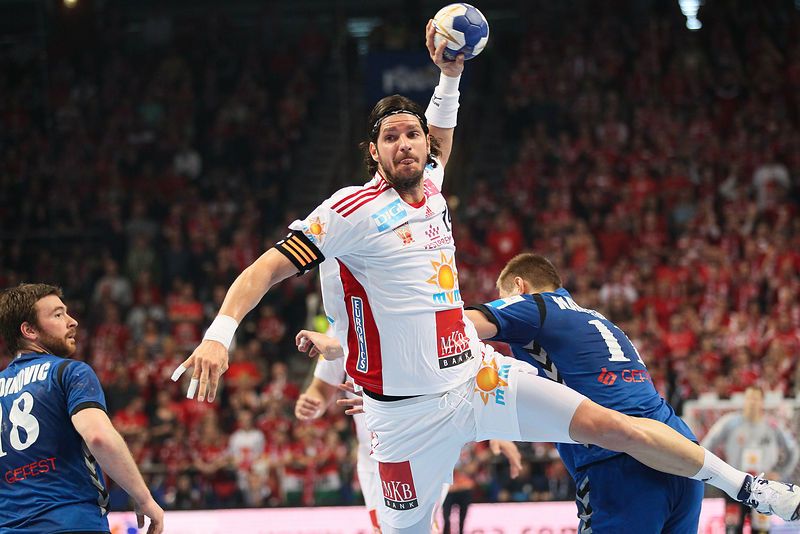 As the London summer slowly approaches, our GD family is even more eager to get back on court. Yet, there is still some time before we can all meet up in person for a game of handball followed by a drink or two. Instead we gather online for another round of London GD’s Q&A with Handball Professionals. This weekend we were in the great company of László Nagy, former player of Telekom Veszprém, FC Barcelona, Pick Szeged, and the Hungarian national team.

László Nagy, it was a pleasure to host you in the chat Sunday morning! Thank you very much for sharing great handball stories with our GD family.

From Basketball to Handball

Although we’ve all become used to seeing Nagy on a handball court, the Hungarian national actually started his sporting career in another field. Thanks to his father, who used to be a professional basketball player, Nagy started playing basketball initially. It wasn’t until later in school that he was introduced to handball. After a couple of local school tournaments, Nagy’s coach and PE teacher soon realised his talent and encouraged him to join a handball club.

For a while Nagy continued to practice both sports, however he slowly transitioned to handball fully as he realised he could get much further at an international level with handball. “Since then I became fully committed to handball,” Nagy adds.

His dedication to handball did however mean declining an offer to play basketball in New York and it seems he still holds fond affection for the sport he gave up for handball. When asked if there’s anything he would change if starting his career over again, Nagy jokingly replies, “I would’ve kept playing basketball and by now I would be playing in the NBA.”

Keep Your Head Up

It’s hard to imagine a handball world without the 2011 World's Best Male Player and luckily Nagy himself is also happy with the journey. “The lost finals are the only regrets I have,” he says but adds that losing the 2000/01 EHF Champions League final to San Antonio remains special despite not being able to take home the trophy with Barcelona. “Losing these kinds of finals isn't easy,” Nagy explains but also emphasises that “as a professional athlete you have to keep your head up and focus on the future”.

Nagy’s ‘never give up’ attitude becomes apparent as he discusses what it takes to achieve handball success. “Without practice you can’t reach these trophies,” he says and adds that it’s important to set personal goals. “You have to feel that you have to be better, it has to be a personal goal,” Nagy explains.

Eventually Nagy’s relentlessness did pay off when he finally went all the way to the top in his second Champions League final in 2005. “It was an unbelievable and amazing feeling,” Nagy recalls and highlights this as one of his best memories in a successful handball career.

Nagy also reminisced about his long run with the Hungarian national team and considers himself fortunate for having had the chance to wear the Hungarian shirt for so many years. “Singing the national anthem is a big pleasure,” he adds.

Nagy’s handball roots may be Hungarian, but most of his professional handball career was with Barcelona in Spain. From early on, Nagy ensured to keep certain routines in place. For home matches, this meant waking up and preparing meals at specific times, putting on socks on his right foot before the left and leaving the changing room as the last player. “My warm up remained the same over the last 10-15 years - same exercises, same order,” he explains before adding that it’s important to be respectful of other players’ rituals at the same time. Nagy also displayed his embrace of Spanish culture having integrated the afternoon nap into his routines, “siesta is my favourite thing to do,” he adds with a smile.

In Nagy’s opinion there’s a very distinct difference between handball in Hungary and Spain. “Practices are long in Hungary”, Nagy says and adds that training sessions are more physical and focused on running and player contact. In Spain, training is shorter but more intense mentally due to the tactical handball style. On his return to Hungarian handball after more than 10 years in Spain, Nagy carried on the Spanish style of handball and found that he mixed both styles.

Nagy’s list of trophies speaks for itself, however the success on court isn't the only part of his amazing handball journey. When asked about his closest teammates, Nagy says that he’s met many good guys through handball and brings up two special friendships. “Iker Romero is like a brother to me,” Nagy says about his former Barca teammate. Another friend who is close to his heart is fellow Hungarian Nándor Fazekas who Nagy often shared room with during preparation and tournaments with the national team.

But as with all good things, they come to an end eventually. “It’s never easy to say goodbye in these situations,” Nagy explains when describing how it felt to leave the national team after a long and glorious career. He had prepared himself mentally for this and was clear that he wanted to finish his handball career with the club and the national team.

The end of playing handball doesn’t mean goodbye to the sport though, as since his handball retirement Nagy has worked as Sports Director of Telekom Veszprém and Vice-President of the Hungarian Handball Association (MKSZ). “I don’t miss handball on court,” Nagy says and explains that he feels lucky to be able to continue work with different aspects of the sport. As to whether we will see him coach in future, Nagy replies, “let’s see what the future brings,” before adding that it would make him proud to coach the Hungarian national team one day.