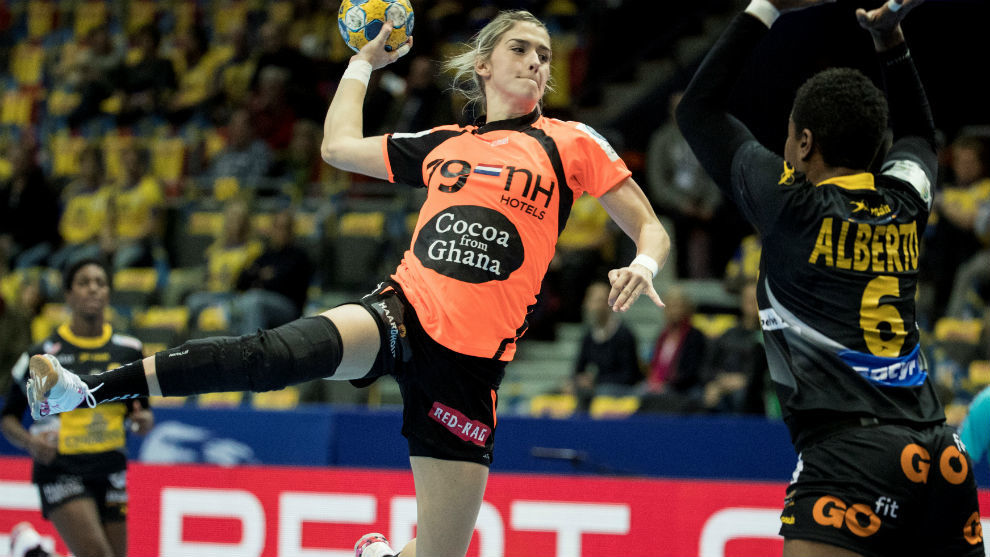 A few weeks ago, London GD had the honour of welcoming Estavana Polman to our 8th edition of the Q&A with Handball Professionals. For the few, who aren’t familiar with Polman we are talking about Team Esbjerg’s three-time Danish Championship gold medalist and MVP of the 2019 World Championship where the centre back also celebrated Dutch gold with the national team.

Estavana Polman, thank you so much for making time to meet our GD family and sharing experiences from your incredible handball career that will hopefully continue for many years to come.

“Making My Passion My Job”

Polman was no more than five years old when she was introduced to handball for the first time. “My grandparents ran a sports hall and were searching for a team, so I went there with my friends and my brother,” Polman explains and adds that they were probably playing around more than actually practicing handball.

It didn’t take many years for her talent to show though, as Polman’s handball career took off just a few years later when she turned 13 and joined her first club. “Then it goes really fast,” Polman explains and recalls having been very upfront about her ambitions to become a handball professional. “I had a really big mouth and I told everyone that I wanted to be the best player,” she adds with a laugh and continues, “I wanted to make my passion my job.”

At age 17, Polman’s handball talent brought her to SønderjyskE Håndbold in Denmark. “I remember coming there as a little girl who didn’t know how to wash or cook,” Polman says about her first move to a club outside Holland. Luckily she met coach Patrick Westerholm who not only helped her with handball training but also more practical aspects of life such as how to plan training and to be on time. “He taught me a lot,” Polman says but adds with a smile that they also used to fight a lot, “I wasn’t easy when I was 17.”

Stability and Perspective on Life

From an early age, Polman worked hard to achieve her handball dreams. “I knew this is what I wanted and I never give up until I get what I want,” she says but admits that the strong passion also made her lose herself and her temper at times. This changed when she gave birth to her daughter, born in June 2017, “if you have a daughter, it controls you a little bit,” Polman says when talking about the stability that comes with motherhood.

Aside from stability, becoming a mother has also meant a change in perspective in life generally, “handball means a lot to me, but not everything,” Polman says and adds that she also copes better with defeats now. Before she could bring home frustrations and have sleepless nights over a lost game, but this has changed as she realises her actions are being observed at home by her daughter and bonus son from her husband’s previous relationship. “Sometimes I still can’t control it,” Polman confesses with a big laugh and admits that she’s a bad loser.

Looking at Polman’s accomplishments since becoming a mother, 2019 Danish League Top Scorer and All-Star Centre Back of the World Championship in Japan last year, it’s safe to say that this added role suits Polman very well.

In the last couple of years, the 28-year-old Dutch national has achieved great success at both club and national level, but her hunger for handball success hasn’t disappeared just yet. “Of course you get motivation from winning,” Polman says when talking about how the many titles keeps her motivated at this point in her career. Having said so, the most important thing which drives Polman’s motivation is simply to have fun. “I know what I have to do to stay fit and free from injuries as much as possible,” she explains and adds that she is willing to train hard when necessary, “but the most important thing is to have fun,” Polman concludes.

Being able to enjoy handball is perhaps also why the Dutch national team has been so successful in recent years. “Almost all people on the national team now started at the same handball academy in Holland,” Polman explains and adds that spending 3-4 years training together helped them become close as a group. As a matter of fact, one of her best friends today is Sanne van Olphen, a former teammate on both the national team and at SønderjyskE. “It’s not always the best players, who are the best team,” Polman adds before giving credit to the Netherlands Handball Association and its coaches for having created a perfect team by allowing younger players to practice with seniors players to gain more experience.

Making the most of Lockdown

Up until Covid-19 took over the agenda, it had been a busy year for Polman with the World Championship in December and plenty of games with Team Esbjerg. In the beginning when there was still no clarity on how and when things would change, Polman had to improvise in order to stay fit. “I had my daughter on my back as weights,” Polman remembers when describing how she dealt with home training when sports halls were closed.

With time Polman took things more easily giving her body a well deserved rest and spent more time with her family. “It gives me a lot of power to spend time with family,” she continues and says she is confident about gaining back form when it’s time to get back on court. “It’s like riding a bike,” Polman explains and adds that the skills will not be forgotten so easily, so she’s focusing more on building up strength to avoid injuries.

In terms of the future, Polman seemingly takes on a fairly relaxed approach to everything, only signing contracts for one year at a time. After joking about how her husband, former professional footballer, Rafael van der Vaart, often provides advice on handball that doesn’t always make much sense, Polman admits that he has taught her this valuable lesson: “Don’t stop [playing] because you will never get it back”. So as long as she still enjoys handball and is capable of continuing, she will carry on playing for as long as she can.